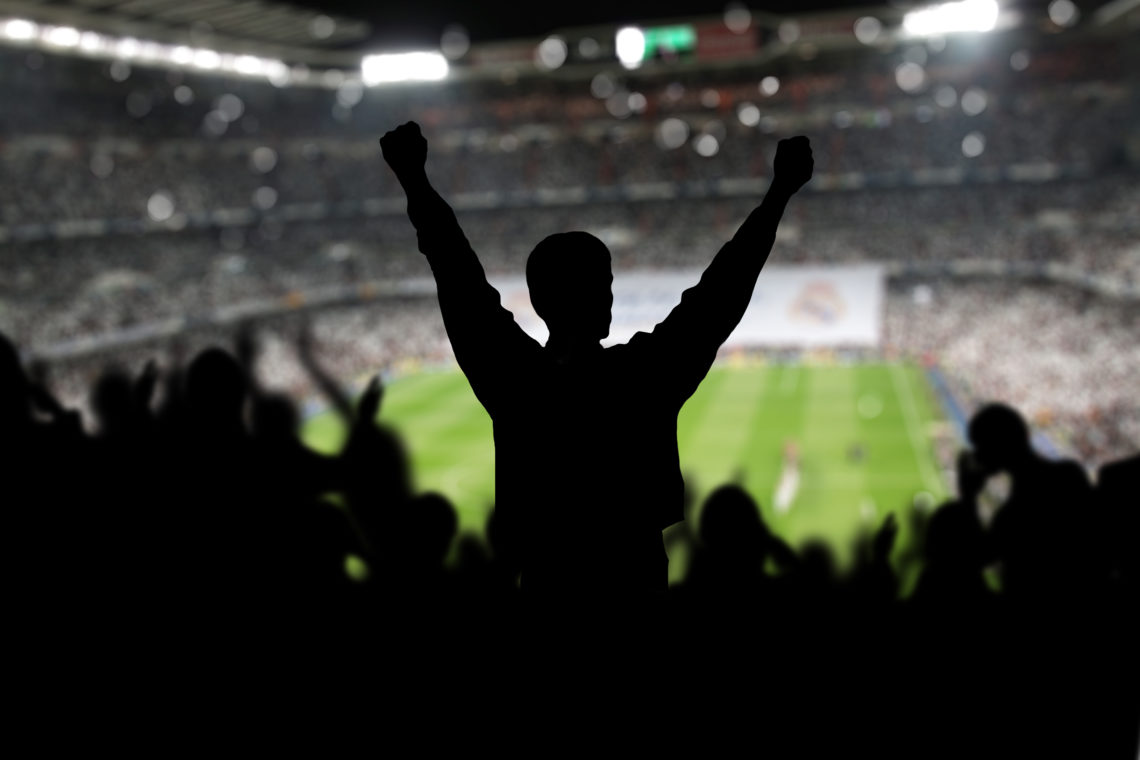 Sports teams are reducing their carbon footprint in the name of sustainability. Changing the food they serve in stadiums is a big piece of the puzzle.

Internationally, millions of sports fans travel to stadiums each year. This season, as the world tries to wrestle back some normality following the Covid-19 pandemic, the numbers of soccer supporters heading to live matches are booming as record-high numbers attended in person.

While there are huge benefits for the entire soccer world when fans attend matches in big numbers, there is a cost to the growing attendance of live sports, particularly for the environment and waste.

A 2014 study by Thomas J Grant Jr found that “attendees generate around 39 million pounds of trash per year” at US sports events. In 2019, Wembley Stadium estimated that “nearly 30 tonnes of waste” each year is created by visitors, while researchers at Cardiff University found individual match goers can produce seven times more waste compared to in their everyday life.

Concerning food, the impact of waste also causes a monumental impact on the environment, largely because over one-third of global greenhouse emissions come from food production alone.

Although the numbers are stark, some soccer clubs have recently acknowledged their responsibility to reduce food waste and its impact on emissions. From the world’s elite to the amateur leagues, clubs have pushed towards more green approaches and reducing matchday wastage.

Several European clubs have even committed to a net-zero approach by 2040 by leveling out their carbon footprint for food sourcing, along with many other areas, such as travel and the use of green energy. As of early 2022, 10 European soccer clubs signed the United Nations Climate Change ‘Race to Zero’ pledge. In addition, soccer associations including FIFA and UEFA also joined the pledge.

To reach such sustainability levels, lower the carbon footprint from food and wastage and to live up to their greener commitments, many football clubs are changing their philosophies when it comes to food production.

Closer to home: Closed-loop production for stadium food
A recent shift towards sustainability can be seen in the move from large-scale importation toward more localized approaches when sourcing, buying and even creating food. In a bid to create a closed-loop model, where waste is recycled in the food manufacturing process, several high-profile football clubs in Europe have partnered with more local suppliers to reduce emissions and improve the standard of their food products.

Tottenham Hotspur is one club who have pushed for greater sustainability since opening a new stadium in April 2019. Spurs are also one of the European clubs that pledged to halve carbon emissions by 2030 and to become net-zero by 2040.

For food production, the club works with a local provider, Wicks Manor Farm, in Essex, located less than 50 miles from the stadium, to source its pork products. As part of the partnership, Wicks Manor uses some of the waste from the Tottenham Hotspur Stadium micro-brewery to feed the pigs on the farm.

However, this is just one aspect of the association and the key to the link between the club and Wicks Manor is decreasing the carbon footprint of meat by sourcing better quality, more identifiable products for all parties.

“It’s back to basics,” says Fergus Howie, Managing Director of Wicks Manor Farm. “We’ve got to cut out the supply chain and we have to work more directly with producers and the end consumer. To do that and get the traceability and to get the knowledge of the product, it’s really good when chefs work directly with the farm. It takes all of the difficulty out of the supply line.”

Simplicity is at the heart of lessening the impact of food waste on football clubs. Howie works closely with Executive Head Chef at Tottenham Hotspur, Mark Reynolds and the link keeps produce local, of good quality and, therefore, more environmentally friendly, which benefits both parties.

“It gives us real sustainability ourselves because we need to be able to grow our crops and know that we’re adding value to them to feed to the pigs and we also need a good marketplace for our pork once we’ve got to that stage once we can make it into those value-added products that we produce.”

Such links between football clubs and local producers are increasing with a greater focus on environmental change and supporting more regional suppliers. Also in the UK, Man City are working with local vendors to sell food products on match days. In addition, Liverpool FC have their own community fruit and vegetable garden, which grows seasonal produce that is used in meals created at Anfield and at the academy venue.

Further examples from European clubs include FC Köln and TSG 1899 Hoffenheim in Germany, which are sourcing more food from regional producers to limit their carbon footprint. Small changes like these can have a big impact on a club’s wastage and they also help to promote positive messages about more localized food sourcing.

In the Netherlands, one of the first clubs to attempt a closed-looped model with local producers was AFC Ajax. Currently, the Johan Cruyff Arena is one of the leading sports venues for greener innovation and environmentally friendly solutions on-site have earned the club a handful of awards for sustainability.

As part of its drive for carbon neutrality, the venue aims to convert 1,800 kilograms of compostable food waste from the stadium into green energy in Amsterdam by the end of 2022.

One of the venue’s more pioneering ideas was to partner with a nearby dairy farm, Dikhoeve. Through this link, grass cuttings were going to be transported to the farm and fed to the cattle on site. Then, the dairy produced would have made cheese to be sold back at the stadium and in venues around Amsterdam.

Even though the idea did not come to fruition due to practical and logistical barriers, such imaginative approaches highlight the ways soccer clubs are approaching waste to become more sustainable. The novel idea also highlights the pinnacle of how localization and closed-loop production models can work in the future.

Meat-free options can promote sustainability
In addition to the localization of food sourcing, clubs are also becoming more conscious about the impact of offering meat during match days. As a result, many clubs now offer vegan and meat-free options on their matchday menus in a bid to lessen the amount of meat consumed on match days.

Such approaches are a response to the huge impact meat production has on the environment. In 2020, researchers Hannah Ritchie and Max Roser found that one kilogram of beef emits nearly 100 kilograms of carbon dioxide equivalents, while lamb, mutton, prawns and cheese also have high greenhouse gas emissions levels.

To try and utilize their roles in lessening meat consumption, football clubs work with meat-free providers to help provide good quality alternatives and to raise awareness about environmental issues. One such link is between Liverpool FC and Quorn, a meat-substitute manufacturer that provides its Myprotein products in 18 countries.

Sam Blunt, Commercial Operations Director at Quorn said about the partnership: “We’ve introduced meat-free alternatives to Liverpool fans and we understand our carbon footprint. We can report on emissions reduction by using Quorn products and we have seen a saving at Anfield of over 100 tons of carbon emissions for the 2021-22 season.

Progress?
But what progress is being made? How impactful are these initiatives and partnerships introduced by clubs?

As is the case with on-field events, football clubs are also judged on their actions and commitments to the wider community. In the UK, and now expanding to Europe, the Sports Positive Leagues matrix researches and evaluates soccer clubs’ sustainability in the Premier League, Bundesliga and Ligue 1. It then ranks clubs in several environmentally friendly areas, among which, ‘Plant-Based, Low Carbon Food’ is one.

Launched in 2019 as a way “to give examples of Premier League football clubs doing great work in sustainability”, Claire Poole began the Sports Positive Leagues project to set ambition and progress from elite football clubs towards sustainability. Generally, Poole has seen a greater ambition from organizations in response to the matrix.

“We have seen great progress from clubs since we started collating data on their effort…and to benchmark their efforts and hopefully increase action and ambition on climate change.”

After just three years, clubs are taking the leagues seriously, with both Liverpool and Tottenham bringing attention to their work after topping the Sport positive Leagues in 2021 and 2022 respectively.

For Poole though, the belief is that the clubs’ work is all geared towards progress.“We don’t think for one minute that they are doing this work just to get to the top of our league, they are doing it because it’s important work that makes sense for their organizations.

“I think in the next 2-3 years we will see huge progress again and a higher level of ambition, commitment and action.”

In general, many football clubs are utilizing their status and infrastructure to change the landscape for food production and its impact on climate change. Innovation and a more localized approach to food sourcing are key, while meat-free alternatives also have an important role in reducing emissions.

The intent is certainly gathering momentum and more clubs are likely to commit to a net-zero goal by 2040. In addition, clubs are well-positioned to share their forward-thinking approaches and to bring about wider societal change and awareness of food consumption and its environmental impact.