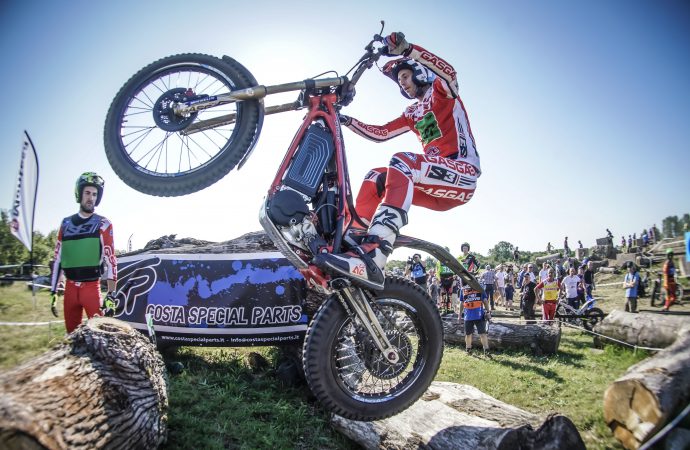 Kattia Juárez Dubón has an eye for talent. Back before he was an eight-time world champion, the director of the FIM International Sustainability Commission discovered a picture of a young Marc Márquez cradling a small penguin and decided that she wanted him as part of the federation’s athlete-facing sustainability programme, Ride Green.

Now, despite being one of the most recognisable people in motorsport, Márquez is still spearheading the effort alongside fellow Ride Green Ambassadors Laia Sanz, Takahisa Fujinami, Randy de Puniet, Alex Salvini, Greg Hancock and Pablo Quintanilla.

Jeremy Seewer, the Swiss Motocross competitor, is the latest high-profile rider to join Juárez Dubón’s band of activists. And just as with Márquez, she believes she’s found a first-class representative.

“We started to follow Jeremy and we discovered that he plays piano. Classical piano, like Mozart and Chopin. So I thought that if he has this type of sensitivity he could be somebody who has respect for the planet,” Juárez Dubón tells The Sustainability Report.

Her assumption was correct, and Seewer joined his fellow Ride Green Ambassadors with little persuasion.

Essentially, the Ride Green Ambassadors are recruited to give the FIM’s sustainability programme a public face. And while those who aren’t familiar with the FIM’s sustainability work may raise an eyebrow when they hear ‘motorcycle racing’ and ‘environmental protection’ in the same sentence, the federation has a long history in the space in sporting terms.

Juárez Dubón (below, with Márquez), who became the director of the International Sustainability Commission in 2010, is determined to steer the organisation through a critical time by establishing a new sustainability strategy for the 2021-2025 period.

Elevating the work of the Ride Green Ambassadors is a key objective in one of six key pillars (awareness) that frame the FIM’s sustainability ambitions for the near- and medium-term future. Juárez Dubón is proud of the achievements the organisation has made in terms of environmental stewardship, but acknowledges that it has not always been the best at communicating its milestones and objectives.

There’s a sense now that, in a similar fashion to the International Olympic Committee, the FIM can influence things beyond its own organisation – within its championships and the wider motorcycling industry in general – and this strategy reflects that.

“I strongly hope that this strategy serves our affiliated members and that they use it as a roadmap for their own strategy,” Juárez Dubón explains.

The six key pillars of the strategy are: People, Sustainable events, Climate, Awareness, Governance and the UN Sustainable Development Goals.

Of the latter, Juárez Dubón says that the organisation’s work will increasingly extend beyond environmental initiatives and towards social projects as well. Education is highlighted as a key imperative, as is gender equality on which the International Sustainability Commission will work with the FIM’s Women’s Commission to develop strategies for engagement and progress.

People, she adds, are an “extremely critical” piece of the puzzle. While there are designated individuals who work on sustainability projects, such as Environmental Stewards and Environmental Delegates, Juárez Dubón’s desire is to see all FIM staff, organisers and “members of the motorcycle family” become more knowledgeable and literate in the field of sustainability.

Seminars, educational tools and leadership training will be developed to make this vision reality, as well as online courses through the FIM’s Academy platform.

Sustainable events are the area in which the FIM has placed a lot of emphasis over the years in spite of the difficult logistical challenges. There are more than 100 World Championships, World Cups and trophies, over 250 FIM-owned events, and 1,500-plus national and international events per year.

High-profile events are monitored by an Environmental Steward, who is trained by an experienced Environmental Instructor and carries out an Environmental Checklist. Environmental Delegates, who are members of the International Sustainability Commission, audit the events thereafter to make sure they were compliant.

According to Juárez Dubón, the International Sustainability Commission’s personnel make-up is geared towards sustainable events. There is a trained chef, who advises on reducing food waste and engaging local producers. Designers, engineers and educational experts also form part of the team.

Juárez Dubón herself is an engineer by profession, with a particular focus on the environment. She became associated with the FIM when she helped to establish the National Federation in El Salvador to give structure to a sport her young son enjoyed participating in. Since then, Juárez Dubón has made it her mission to place sustainability at the heart of the federation, even if, in the early days, this wasn’t so easy.

“Nobody could see the relationship between sport and the environment,” she explains. “Only in the last 10 years of so has sport really been recognised as a potential accelerator of sustainable development.”

In Trial-E and MotoE competitions (electric bike series), Juárez Dubón believes that the FIM has the opportunity to really push forward e-mobility for two wheels in the same way Formula E has for four wheels. Promoting these championships is a key part of the organisation’s climate strategy, which also includes the creation of a permanent climate action working group and the development of an FIM Net Zero strategy, which will be revealed in the coming months.

“I’m really excited to develop this climate action plan for the FIM and work together with my colleagues to research areas such as alternative energy,” Juárez Dubón says.

One of the actions the federation will take to improve its internal sustainability governance is building an Electric Station at FIM HQ in Geneva to encourage electric car and bike adoption among members of staff.

Education is also a key element of this pillar, with sustainability educational programmes and education and training working groups being prepared for Continental Unions and National Federations. Outside of the FIM’s immediate circle of influence, sustainability criteria will start to be included in contracts with partners and suppliers.

The strategy, called The Future in Pole Position, was launched at FIM’s inaugural Sustainability Week this week, but has been a year in the making. Extensive stakeholder engagement processes and the development of a materiality analysis laid the foundation for the final piece of work.

Ultimately, Juárez Dubón wants this strategy to lead to a more prominent role for the FIM and motorcycling in general in the field of sustainable development.

“Motorcycling is excitement; it’s passion,” she says. “It’s freedom and something that makes people happy. Because of these things, I believe we can create a legacy – and we’re moving towards it with more ambitious visions of sustainability, and with the skill and commitment of the FIM family.”