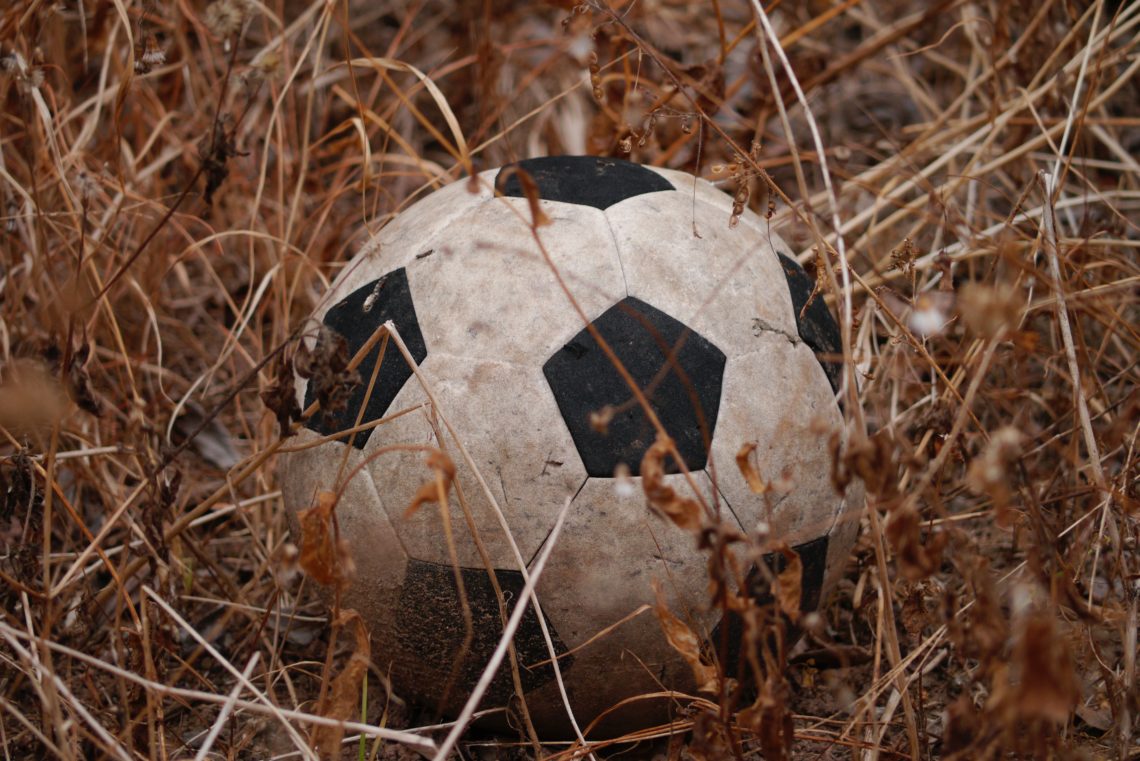 Balls are a fundamental part of many sports and millions are produced around the world each year.
Many are made of leather – it takes 35,000 cow hides to make the 700,000 balls used in a regulation NFL season – while the use of rubber and plastic is also widespread.
The materials used, the production processes and the fact many end up either in landfill or in the sea means balls can have a negative impact on the environment.
So what are the issues and can anything be done about them?

A reliance on animal products and non-renewable resources.
A single cow hide can make about 20 NFL balls, according to Wilson Sporting Goods, the official NFL ball-maker since 1941. The Super Bowl alone reportedly requires 216 balls, with each team getting 54 for practice and the same number for the game.

In the NBA, basketballs, also supplied by Wilson, are mainly made from leather and rubber. The leather used for official NBA basketballs has come from The Horween Leather Co in Chicago for the past 20 years, and around 10 official-size balls can be produced per hide.

The balls for bat-and-ball sports such as Test cricket and major league baseball are also made from leather and rubber, along with cork and twine or yarn.

So why is the use of animal products an issue?

Most nations have signed up to the Paris Agreement, which sets out an ambition to cut the global greenhouse gas emissions which are causing climate change.

The impact of livestock on emissions varies between countries. Globally, the UN estimates it makes up more than 14% of all man-made greenhouse gases, including methane.

When we talk about emissions, we usually think of carbon dioxide (CO2). But livestock’s emissions also include methane, which is up to 34 times more damaging to the environment over 100 years than CO2, according to the UN.

However, Wilson has said that the animals from which the hides for its sport balls come are not kept solely for this purpose, instead they have been used for meat production. The company adds it has clear guidelines and policies which are based on internationally recognised standards.

For example, the rubber from a football might come from one part of Asia, with production taking place in another.

In football, it is estimated that more than 40 million balls are produced around the world each year. Modern premium balls are mainly made up of butyl rubber as well as polyurethane or synthetic leather which comes from plastic, derived from crude oil, making it a non-renewable resource – although some of the adhesives and textiles may come from natural sources.

This year’s World Cup ball by Adidas, which includes the addition of a microchip in its middle, will also add further materials and production time to those used at the very top of the game.

Where do balls end up?
In 2018 as part of a photography project, PENALTY, Mandy Barker put a request out on social media for people around the world to send her footballs that had been found washed up on beaches. In four months, 992 marine debris balls were recovered from 41 different islands and countries and from 144 different beaches, by 89 members of the public.

While many end up in the sea, plenty of others find their way to landfill.

Some sports already have ways of extending the lifespan of the balls they use.

In the Premier League, footballs are recycled wherever possible. Clubs use the same set throughout each part of the season, reusing them in training sessions and matches.

Balls can be recycled or reused in a number of ways, including handing them down to academy age groups, using them during injury rehabilitation sessions and passing them on to charitable causes, including clubs’ community programmes.

Tottenham Hotspur, who finished joint top with Liverpool in the 2021 Green League table measuring the sustainability of all 20 top-flight sides, said any of their unusable footballs are given to police dogs and sniffer dogs that operate at Tottenham Hotspur Stadium.

The Boston Red Sox order approximately 56,000 baseballs throughout a season, and once used they become batting practice balls or are sometimes sent to their minor league affiliates.

The England and Wales Cricket Board said that once balls are beyond use at the highest level they are donated to schools.

It also confirmed it is looking at a more sustainable ball, though development could take time given the traditional nature of most handmade balls for the elite game.

Wilson said a handful of initiatives were under way that will come to market next year. They will be part of their ‘Gen Green’ product collection.

The company, whose tennis arm boasts a Naked Series of rackets produced with a focus on sustainability, has also hired a sustainability director to spearhead initiatives across its portfolio.

“We are always evaluating sustainable material and manufacturing methods that meet the high expectations of professional players and our global consumers,” a spokesperson told BBC Sport.

Is there a better way?
There are businesses which claim to produce eco-friendly sports balls and equipment.

Another is US based Eco Sport, which produces “high-quality sporting equipment” using “eco-friendly, biodegradable TPU”.

Founder Troy Akin started the company after looking for vegan sporting goods, and discovering the ones he came across used toxic plastics.

“I found a material that’s biodegradable, sustainable and vegan and it works well for the majority of sporting goods – and I created Eco Sports out of it,” he told BBC Sport.

Because of the properties of TPU it can be used for a large range of products, and as part of their range they sell basketballs, footballs and American footballs.

“It’s still technically a cross between a rubber and a plastic, it’s just way more sustainably made, and it will degrade in three to five years,” he added.

“So while it’s the best option out there, I still think we can do better in sporting goods and that’s what we are heading towards.”

There are challenges with any changes made to the ball at professional level.

Athletes can be creatures of habit and, with the ball often being their main instrument, even the slightest change can be problematic.

In the summer of 2006, the NBA introduced a new synthetic basketball produced by Spalding, the official NBA ball supplier before Wilson. At the time, it was reportedly the first change made to the NBA ball in more than 35 years and only the second in 60 seasons.

The ball was made of a synthetic material that players quickly complained was not as bouncy as the old one, too slippery and even scratched their hands. As a result, the old leather ball was soon brought back.

Similarly, some goalkeepers complained about the movement of the eight-panel 2010 World Cup ball – with England’s David James calling the Jabulani “horrible”. Adjustments were made to prevent similar issues in future editions.

In terms of wider sports equipment, Eco Sport plans to expand its range as it aims to do more for the planet.

“Baseball gloves is our biggest next target and that’s something we’re working on, along with baseballs,” explains Akin.

“There are different sports that use animal products or could make a more eco-friendly product.“