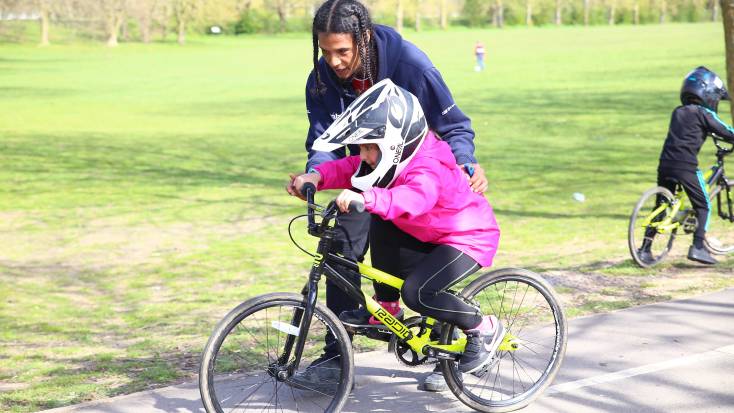 British Cycling and the Rapha Foundation announce a partnership that will empower more communities to create their own champions of cycling. The partnership, which will take the form of British Cycling City Academies Supported by Rapha Foundation, will help to improve the gender balance, increase involvement from diverse ethnic communities and encourage greater engagement with young people from lower socioeconomic backgrounds.
The announcement follows the publication of #OurRide, British Cycling’s Equality, Diversity and Inclusion strategy, which sets out a long term commitment to ensure the sport is truly reflective of Britain’s communities. The project is part of Rapha’s commitment to further fund, develop and represent a more diverse cycling community around the world, with 60% of the Rapha Foundation’s annual $1.5 million funding going towards supporting BAME and female focused programs and initiatives. Together, they have a shared mission to tackle the most fundamental issues facing the sport.

The City Academies model is an exciting new, localised concept for cycling, aimed at removing the barriers to participation and empowering people to champion cycling in their communities. It will do this over two phases – City Academy Hubs and City Academy Talent Centres.

Funding and support from the Rapha Foundation will enable British Cycling to launch a two-year pilot project in London from July 2021, with a national rollout planned thereafter.

The first phase of the pilot involves the setting up of City Academy Hubs. For each Hub, British Cycling, through the support of the Rapha Foundation, will recruit a lead coach within the community, to ensure they are able to speak to the wants and needs of those involved, creating role models from both a rider and leader perspective. These coaches will be supported, mentored and upskilled so they are able to provide cycling education and lead fun, skills based sessions in their respective community spaces.

The first City Academy Hubs will be in the London Boroughs of Hackney & Newham, home to the Queen Elizabeth Olympic Park that staged the 2012 London Olympics. Recruitment of two full time City Academy coaches was completed in June. Over the next six months, the City Academy Hubs will work closely in partnership with community groups and organisations to establish fun entry-level, skills activity sessions led by those local to the area. These activity sessions will take place in local open spaces, such as parks and commons, with the intention of increasing visibility of cycling in these areas. The first of these activity sessions, initially aimed at children aged 10-14 years, will be in place by Autumn 2021.

The second phase, the City Academy Clubs and Talent Centres will help to support those who wish to progress to professional participation in cycling via the British Cycling development pathway.

The development of the City Academies is driven by the combined mission of both British Cycling and the Rapha Foundation to build a better future for cycling and cyclists. In the UK 17.1% cyclists come from diverse ethnic communities, yet ethnically diverse populations make up just 5% of British Cycling’s membership. Likewise, 46.3% UK Cyclists come from Lower Socio-Economic Communities yet 85% of the British Cycling talent pathway is made up of riders from areas in the country’s most affluent communities.

This need for more access to sport has only been amplified by the pandemic as almost 1 in 3 children have not met the recommended 30 minutes per day physical activity, with a greater decline in children and young people from lower socioeconomic and diverse backgrounds**.

British Cycling and the Rapha Foundation understand that whilst not all of this is within their control, they take seriously their responsibility to show leadership in demonstrating that in becoming more inclusive and more diverse, the sport of cycling will only grow in strength. The development of the British Cycling City Academies Supported by Rapha Foundation is one of many steps being taken towards this.

Brian Facer, British Cycling CEO, said: “The British Cycling City Academies project is a key part of our wider strategy to make cycling more inclusive, more diverse and more reflective of our society. Ensuring greater diversity is essential to the future of our sport and it is also the right thing to do from a societal perspective.”

“I’m very excited to be partnering with Rapha, through the Rapha Foundation, on this project. By making our pathways into participation and competition more accessible we will be enabling more talented cyclists and potential champions of the future to shine, regardless of their background.”

“We also believe that the City Academies can be real beacons within their communities, and that once the first cyclists start to come through into our development pathways it will soon create a virtuous circle and a positive legacy for the future.”

Simon Mottram, Founder and Chief Executive of Rapha and the Rapha Foundation, said: “As passionate cyclists, we firmly believe that cycling has the power to change lives and help make the world a better place. But for the true potential of pedal power to be realised, it must be accessible to all.”

“As a brand with British roots, we’re proud to be able to support organisations here on home soil, which is why we are incredibly excited to be working with British Cycling through the Rapha Foundation, an organisation with a shared mission to better the sport and improve access and support for the next generation of racers.”

“The City Academies concept represents a fresh new way of nurturing new cycling talent, who represent the future of British cycling. An initiative we are very proud to be a part of.”