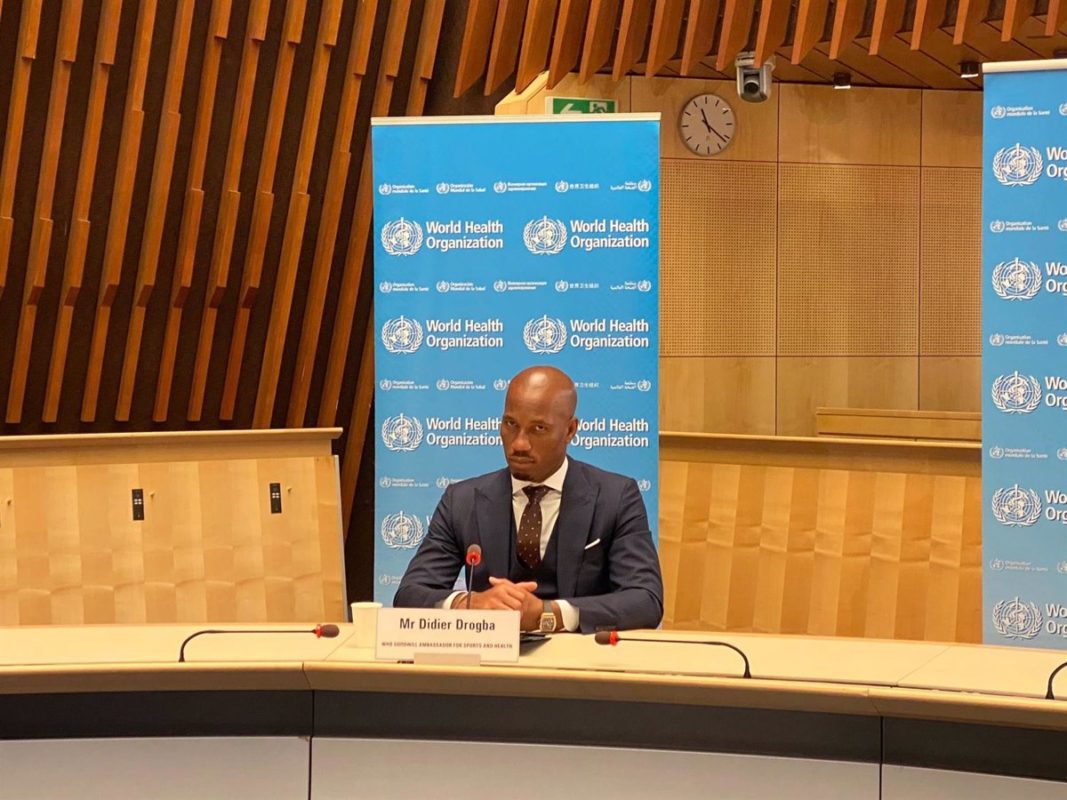 Former soccer player Didier Drogba was announced on Monday as a World Health Organization (WHO) Goodwill Ambassador for Sport and Health.

Drogba, originally from the Ivory Coast, will support WHO in advocating on the benefits of physical activity and other healthy lifestyles, highlighting the value of sport, particularly for young people.

Well known for his football career at Chelsea and for having twice been African Footballer of the Year (2006 and 2009), he has a long history of participating in various health campaigns, such as healthy lifestyles, the fight against malaria. and HIV prevention and control.

“I am honored to join the World Health Organization and support its work to help people achieve the highest possible level of health, especially young people in all countries. I have benefited first-hand from the power of sport. to lead a healthy life and I am committed to working with the WHO to share these benefits throughout the world “, Drogba commented at a press conference this Monday from Geneva (Switzerland).

WHO Director General Tedros Adhanom Ghebreyesus has praised Drogba not only as a “legend” of football, but as a “dedicated advocate for the health and sustainable development of communities.” In addition, it has ensured that its support for the WHO can help curb the growing burden of non-communicable diseases (NCDs) by promoting healthy lifestyles, including the benefits of physical activity and sport for all people.

“Didier is a champion both on and off the field. We are delighted that he is part of our team and that he is helping communities around the world to achieve and set goals through sport for their physical and mental health and well-being. Also will support the mobilization of the international community to promote sport as an essential means to improve the physical and mental health and social well-being of all people, including to help recovery efforts from COVID-19, “said Tedros.

WHO, Qatar AND FIFA CAMPAIGN FOR THE 2022 WORLD CUP

The announcement of Drogba as WHO Goodwill Ambassador has been made during the launch of the campaign ‘Healthy World Cup 2022 – Creating a legacy for sport and health’, which will run for three years and is organized by the Qatari Ministry of Public Health, WHO and FIFA.

The international health body of the United Nations and Qatar, in close collaboration with FIFA, will carry out joint activities to promote healthy life, health security and physical and mental well-being at the World Cup, to be held on November 21 as of December 18, 2022.

In addition, another objective of the project is to establish and transfer the best practices in the field of health, safety and protection promotion for use in major sporting events around the world.

The main themes that the project will focus on are supporting people to practice healthy lifestyles, including through physical activity, healthy diets, and smoking cessation and control; promoting health security, focusing on ensuring the safety of concentrations and mass events; and health promotion and awareness.

“I would like to thank Minister Al Kuwari and the State of Qatar for partnering with WHO to make the 2022 FIFA World Cup a model for healthy sporting events. WHO is committed to working with Qatar and FIFA to harness global power. of football to help people lead as healthy and safe lives as possible. As the Qatar tournament will be the first World Cup held during the pandemic, the event offers a unique opportunity to show how sport can promote health now and provide a lasting legacy to host healthy sporting events as the world recovers from the pandemic, “said Tedros.

Qatari Public Health Minister Al Kuwari has argued that his goal “is not only to hold a successful sporting event, but also to celebrate the healthiest sporting event possible.” “That is why we have partnered with WHO. We look forward to working closely with WHO, FIFA and other partners on this new project to organize a fantastic and healthy World Cup and leave a legacy that supports healthy, sustainable and safe mega sports events. in the future, “he added.

For his part, FIFA President Gianni Infantino praised this new partnership between Qatar and the WHO. “WHO’s new project with Qatar aligns perfectly with FIFA’s collaboration with both parties. Working together, we will harness the power of sport as a catalyst for a safer and healthier world,” he added.

The Qatar World Cup in 2022 has generated controversy at the international level due to the absence of human rights for women or minorities in this Arab country. A report released in February by the English newspaper ‘The Guardian’ estimated that more than 6,500 migrant workers from India, Pakistan, Nepal, Bangladesh and Sri Lanka have died in Qatar since the World Cup was assigned 10 years ago.