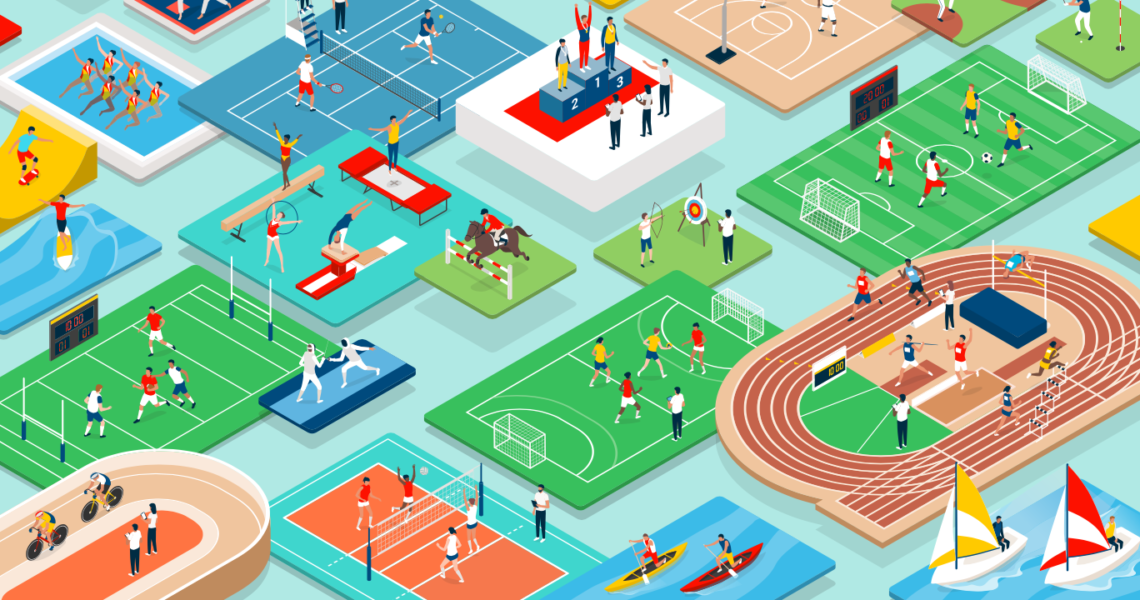 In September 2020, PricewaterhouseCoopers published its latest Sports Survey. A piece of research that takes the temperature of the sports industry and neatly illustrates the opportunities and threats it should prepare to face, the Sports Survey is great intel. It’s hotly anticipated.

But, in 2020, the major threat that we’re facing has been apparent for months. And there’s little or no sign of it going away.

We all know that Covid-19 has ripped through the sports industry like a hurricane, but the findings of the Sports Survey back the hyperbole up with hard data.

The sector, which grew by 8% over the past 3-5 years, is projected to only grow by 3.3% over the next 3-5. More than half (56.5%) of sports industry professionals believe that, compared to other industries, sport was either “below average” or “very poor” in its preparation to face a crisis like Covid. And almost 70% reckon that the impact of the health and safety crisis is the top threat to sports industry revenue.

As bad luck would have it, the pandemic took hold during a year that the Summer Olympic Games and Paralympic Games was due to commence in Tokyo. That, combined with the cancellation or rescheduling of many events, has hit the international sports federation (IF) community very hard.

The International Olympic Committee has had to loan or grant money to several IFs to safeguard their survival. For those in the industry who are focused on leveraging the Olympic Movement to push momentum around sustainability forward, the pandemic couldn’t have come at a worse time. Before the world went into a blanket lockdown, several IFs had pledged their commitment to the sustainability cause.

Indeed, of the (at time of writing) 157 signatories to the UNFCCC’s Sports for Climate Action Framework – in which sports bodies commit to measuring, reducing and offsetting their carbon emissions while advocating for climate action – 33 are international sports federations. But with finance now a major issue for many IFs, several who made those commitments will be concerned about having the necessary resources to fulfill those pledges.

However, Raffaele Chiulli, the president of the Global Association of International Sports Federations (GAISF, which represents a number of those organisations, and is a signatory to the framework itself), is optimistic that sustainability will “become even more important in a post-Covid-19 environment”.

To help keep sustainability top of its members’ minds during challenging times, GAISF established its own portal dedicated to the subject – sustainability.sport – collating all content related to sustainability and sport in one place to make the topic more accessible and less overwhelming.

“Through this, we are able to increase the accessibility and visibility of several sustainability initiatives, case studies and resources,” Chiulli tells The Sustainability Report.

“I believe that it is important for all our IFs to take a leadership role within their sport when it comes to sustainability,” he adds. “IFs have a special place at the head of their sport and it is important that they lead by example. And that’s where the platform is useful; historically, IFs have set the rules for their sport. Consistent with this, IFs should also create sustainability guidelines that can be used to educate and inform.”

A number of international federations have already developed their own sustainability guidelines, or are in the process of doing so, like the Union Cycliste Internationale, which Chiulli reveals will unveil its own “multi-disciplinary sustainability toolkit” later this year.

The International Equestrian Federation (FEI) has published its own sustainability handbook to guide its event hosts worldwide, and the leadership doesn’t stop there. Chiulli highlights work being done by World Archery, the International Federation of Sport Climbing, World Rowing (FISA) and World Sailing to emphasise his point that, despite the difficult conditions and reduced resources, IFs are taking sustainability seriously.

World Archery, for example, has pledged to reduce its carbon emissions by at least 10% every year by “promoting lasting change in personnel attitudes” and transforming internal processes that “generate high carbon consumption”. A five-year action plan is being developed by the federation following an internal analysis of carbon emissions.

Innovation is key to the programmes being developed by the International Federation of Sports Climbing and World Rowing. The former has decided to offset the carbon emissions it generates through flights taken by staff and officials by investing in sustainable aviation fuel – that reduces carbon emissions by up to 80% – through the CompensAid carbon compensation programme.

The latter will host its 2021 Indoor Championships virtually, mainly because of the continuing health crisis, but the lack of travel will also help to reduce the negative environmental impact the event would have otherwise generated. World Sailing, long associated with a robust approach to sustainability, has banned single-use plastic at international events.

“I also want to mention the great efforts from all the motorsport federations,” Chiulli says, “who support and foster the preservation of our environment by establishing and implementing good practices and by adopting innovative, sustainable technologies.”

Chiulli’s own IF, the Union Internationale Motonautique (UIM), has also taken strong steps towards a more sustainable future and the adoption of sustainable mobility with the launch of E1, the first-ever electric powerboat world championship he devised alongside Alejandro Agag (founder of Formula E and Extreme E) and Rodi Basso (former director of motorsport at McLaren).

The concept is simple: high-performance racing boats powered by electric propulsion systems (instead of petrol engines) will race on short courses off the coast of major cities and “remote locations” around the world, in parallel with Extreme E, the off-race electric car racing series beginning in early 2021.

UIM’s president said he was excited to be working with Agag who is a “visionary, but also pragmatic” on the project to help decarbonise the marine industry and showcase the impact of climate change to the sport’s fans.

“If we don’t fight climate change we will have countries and coastal cities that can disappear. Even a small sea-level rise will be a complete disaster for them,” he explains. “So we need to prevent it and sport has great power in that respect.

“I’m convinced that electric sea racing will accelerate sustainable mobility at a global level, and support and foster the preservation of the marine environment. Sport has the power to be a key driver – through sport we can promote sustainable behaviours. I underline behaviours by demonstrating that sustainability is at the heart of sport and our everyday lives.”

Chiulli is clear that IFs should view sustainability as a commercial opportunity, particularly during tough times. According to the PwC 2020 Sports Survey, innovations like eSports and enhanced digital media have emerged as areas of growth during Covid. Around 70% of respondents think that joint projects and co-creations with sponsors can stimulate growth, and sustainability can be part of that mix.

“First and foremost, these have been very difficult times for many IFs – for all of us. But our IFs have shown remarkable resilience and innovation,” Chiulli acknowledges. “In a way, Covid has actually provided IFs with great opportunities to try new things such as virtual competitions. By accelerating such innovations, IFs have been able to test these new formats for certain events that are inevitably more sustainable.”

And how does Chiulli hope and expect the sustainability.sport platform to assist with this transition?

“Well, my dream is that in one year from now we’ll be able to triple the number of good practices, guidelines and publications that we’ve already uploaded. And step-by-step, we will be able to involve the whole sports community on a worldwide basis.”