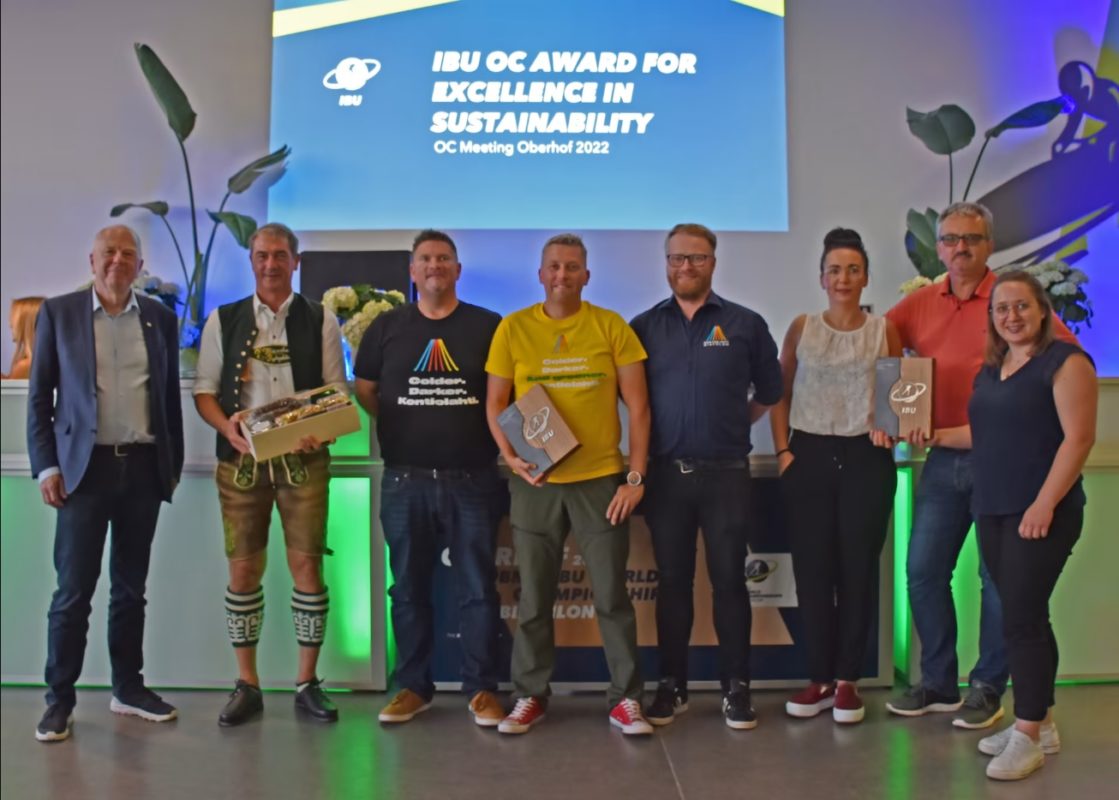 The inaugural winners of the IBU OC Award for Excellence in Sustainability are the organising committees from Kontiolahti, Finland for the World Cup, and from Arber-Bayerischer Wald, Germany, for the IBU Cup / Junior Cup category.

Both winning organising committees (OCs) received their sustainable Award trophies along with the winner’s cheques for €10’000 and €5’000, respectively, during a dinner at the IBU OC Meeting in Oberhof on 2nd July.

This new annual award was established by the IBU in 2021 to promote impactful and replicable sustainability and climate actions implemented successfully by the IBU event hosts. Its goal is to highlight the organising committees’ contributions to the aims of the IBU Sustainability Strategy 2020-2030, across the five different Focus Areas: Climate, Sport, Venue & Event, People, and Communication & Awareness.

In addition to the winners in each category, other notable entries came from Östersund, Ruhpolding, Hochfilzen, and Martell. Every entry was assessed by an external panel of five judges, consisting of a mixture of IBU Athlete Ambassadors and IBU Sustainability Expert Reference Group members. Each of the judges went through the same process: individually scoring all applications in terms of their quality across the five award criteria, and then meeting together online to reach a consensus on contestable results.

The first and second place in the IBU World Cup category were close, with the jury finally finding Kontiolahti narrowly ahead of Östersund due to its holistic approach to sustainability, considering not just the environmental factors, but also elements of inclusion, accessibility, and safety. Highlights of their entry included reducing emissions from transport and travel by organising public transport and using renewable fuel in grooming machines; inviting children under 12 to the event for free; and educating staff and volunteers on environmental guidelines. The replicability and simplicity of Kontiolahti’s initiatives were also valued by judges.

The idea that sustainability and regionality can be implemented at events with little or no additional cost was promoted in Arber-Bayerischer Wald’s entry. Arber focussed on food & beverages and waste management. Locally produced, fair trade or organic products were prioritised together with the nutrition: ready-made and frozen products were prohibited, and warm meals were prepared by local chefs. Alongside several waste management initiatives, so-called Green Angels patrolled the stadium to ensure no waste was left behind. It was well-noted too that Arber’s prize money will go towards the installation of a charging station for electric vehicles and bikes at the Hohenzollern ski stadium.

Ruhpolding’s award entry, a project called Big Battery Box, was also praised for its transferability. Essentially, the Big Battery Box is a self-sufficient battery to back up the power supply of the TV broadcast and floodlight system. During the IBU World Cup, it replaced two diesel generators which earned Ruhpolding a special mention in this year’s application round.

Commenting on the success of the award in its first year, IBU President Olle Dahlin said, “As everybody knows by now, our sport is threatened by the impacts of climate change. That is why I am immensely proud of those Organising Committees that are venturing ahead to find workable alternatives to fossil fuel usage, and demonstrating the benefits of these to their communities, the biathlon family, and the wider sport movement. My congratulations to Kontiolahti and Arber-Bayerischer Wald for their awards.”