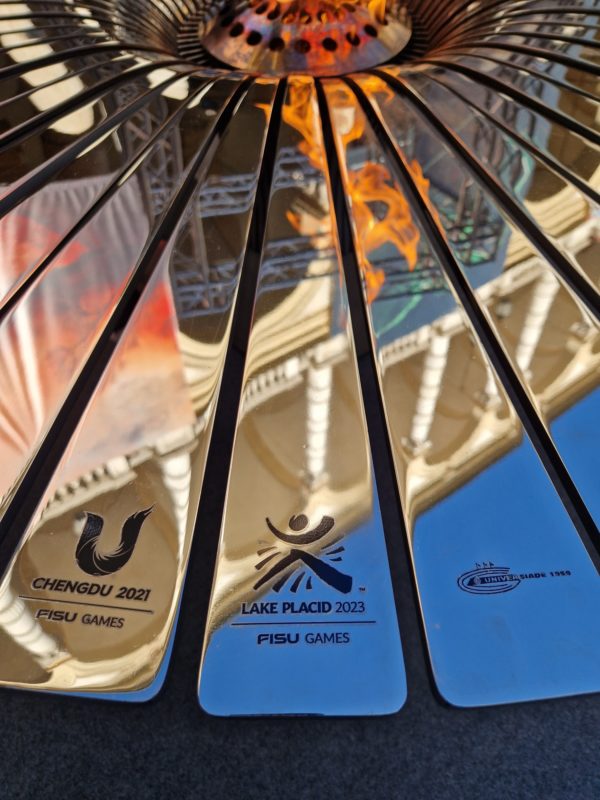 In the birthplace of university sport, Torino, Italy, today the FISU flame has begun its journey to the United States for the Lake Placid 2023 FISU World University Games. However, in keeping with the goal of reducing carbon footprint and creating sustainable events, the flame is being transformed from the traditional oil or gas fueled variety to one that is a battery-powered LED display.

“The lighting of the flame at the birthplace of university sport is an exciting moment,” said Ashley Walden, Executive Director of the Adirondack Sports Council and Chief Operating Officer of the Lake Placid 2023 FISU Games’ Organising Committee. “Much like an athlete’s journey to Lake Placid, it symbolises the energy and endurance that it takes to compete at this level.”

FISU Games Winter Director Milan Augustin added, “Today is an exciting day on the path to Lake Placid with the symbolic handing over of the FISU flame. And to have the ceremony in Torino, the birthplace of university sport and the host of the 2025 FISU World University Games Winter, is equally important.”

The battery-powered LED torch represents the spirit of competition, power of athleticism and the strength that sport brings to the world’s young people. This will come to the fore during the Lake Placid 2023 FISU Games which take place 12-22 January 2023 with 2,500 student-athletes and delegates set to be in upstate New York from 50 countries and 600 universities.

A connection to the 1980 Olympic Winter Games, that Lake Placid hosted, also exists with this torch as it was designed by Argyle, New York’s Adirondack Studios, which built the 1980 award podiums. Made of elongated steel, the torch is 56 cm (22 inches) long and encases a glacial-blue body that is capped by recycled crystalline glass, to provide an artistic demonstration of ice and water.

“The torch is an example of our commitment to host the greenest and most sustainable Games in FISU history and work as one to save winter and the sports that we love,” said Walden.

The ceremony in Torino included representatives from Lake Placid, FISU, the US Consulate of Italy, and the University of Torino. The symbolic flame will be brought back to the United States to be part of an arrival ceremony in New York City on Thursday 22 September, as part of the city’s Climate Week, and will be the first of numerous stops in New York State.

“The message of peace and friendship will be carried in the torch relay to 12 cities across New York State until the flame – this year for the first time as a LED flame – arrives in Lake Placid. What city could better represent this message and the related values than Lake Placid, a two-time host of the Winter Olympics (1932 and 1980) and the organiser of the Winter Universiade in 1972,” said FISU Senior Executive Committee Member Verena Burk.

While still more than three years away, activities related to the Torino 2025 FISU World University Games also took place. One was the #To25 Brain Storm which invited top talents from Italian and international universities to brainstorm ideas to achieve the millennium’s goals. Additionally, after sunset the Torino 2025 FISU Games logo and colours lit up the city centre’s four bridges, as well as the iconic Mole Antonelliana. Both events helped highlight planning that is well underway for the FISU Games Winter that return to Torino in 2025.