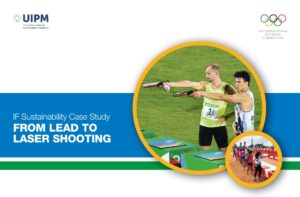 UIPM: From lead to laser shooting

Environmental pollution by lead is a global issue. No known level of lead exposure is considered safe, and the toxin is one of the most deadly on the planet. Its common use has resulted in extensive environmental contamination and widespread public health problems, harming young children in particular. Before 2011, Modern Pentathlon athletes used approximately 25 tonnes of lead pellets per year globally, some of which inevitably ended up in the environment. The International Union of Modern Pentathlon (UIPM) took this into consideration and, wanting also to improve safety and inclusivity for its athletes, changed from lead to laser pistols in 2011. Laser equipment is safer to use, has minimal security restrictions and is available to children, allowing UIPM events to target new audiences and be conducted in different locations, such as city centres, public parks, clubs and schools. Many countries have restrictions for minors when it comes to shooting and possession of sport pistols, but this is not the case for laser equipment. Since the introduction of laser pistols, the number of athletes has doubled and the UIPM has introduced new disciplines, enabling the engagement of youth, and inspiring future athletes. A new event, Laser-Run City Tour, reached almost 60 cities and 15,000 participants of all ages in 2017.

Following the success of the World Curling Federation's (WCF) New Facility Loan programme, which allows member associations (National Federations; NFs) to apply for loans to build new curling rinks, the WCF decided to create a Green Facility Loan initiative. Designed in a similar manner to the New Facility Loans, Green Facility Loans provide an opportunity for members and clubs within NFs to access funding in order to improve existing facilities with new technologies and equipment that is more sustainable and may help to reduce energy costs.