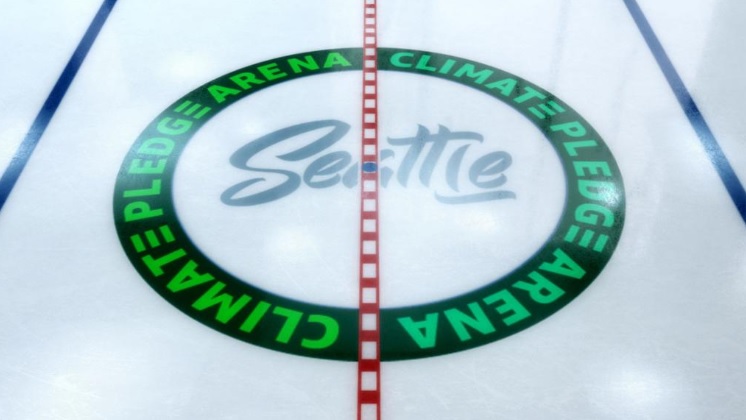 SEATTLE, Oct. 22, 2021 /PRNewswire/ — Tonight, after three years of construction and $1.2 billion of private investment, Cimate Pledge Arena opens its doors to the public. The arena is home to the NHL’s newest franchise the Seattle Kraken, the four-time WNBA champions Seattle Storm and the best in live entertainment and music.

To celebrate grand opening weekend, seven-time Grammy award winners Coldplay will play their first arena show in nearly five years as they launch their new album, Music of the Spheres. Amazon Music will stream the show globally so fans can tune in at home or on their mobile devices. The Seattle Kraken will play their much anticipated inaugural home game on Saturday, October 23. The following day, members of the public are invited to a Community Open House and Harvest Market at Seattle Center.

“Tonight is the biggest comeback in Seattle’s history,” said Tim Leiweke, CEO of Oak View Group. “The arena under this roof started as the Washington State Pavillion, the Seattle Center Coliseum, and then KeyArena.  Just as it put Seattle on the map in 1962, Climate Pledge Arena will do it once more. Seattle, welcome to the new era of sports and entertainment. Welcome back under our roof.”

The project began in early 2017, when the City of Seattle issued a request for proposal to redevelop the historic arena at Seattle Center and entered into an agreement with Oak View Group. Over the past three years, designed by Populous and Rockwell Group and under the guidance of Mortenson, engineering and construction firsts have been achieved. The 44 million pound landmark roof was held up by temporary steel columns while the new arena was constructed underneath, doubling the square footage.

In June 2020, Amazon secured the naming rights and named it after the Climate Pledge initiative, which calls on signatories to be net-zero carbon across their businesses by 2040—a decade ahead of the Paris Agreement. The venue is expected to be the first net-zero carbon certified arena in the world and set a new sustainability bar for the sports and events industry. It is completely powered by renewable energy and sustainability is embedded into every element of the building.

“This is a historic moment for climate progress as we bring sustainable architecture to life and deliver an important message to the people of Seattle and beyond. Last year, Amazon secured the naming rights to the historic arena originally built for the 1962 Seattle World’s Fair, and we named it Climate Pledge Arena, as a regular reminder of the importance of fighting climate change,” said Kara Hurst, vice president of worldwide sustainability at Amazon. “I am incredibly proud of the collaboration between all of the teams involved to make the vision of Climate Pledge Arena a reality.”

The Seattle Kraken, the NHL’s 32nd team, began their inaugural season in Las Vegas on October 12th. The team, under the guidance of majority owner, David Bonderman, has broken records for ticket and merchandise sales since it was officially awarded in December 2018. The arena is expected to be sold out as they take on the Vancouver Canucks on Saturday night.

For both concerts and sporting events, Climate Pledge Arena will use the latest technologies to improve the fan experience. The Kraken+Climate Pledge Arena app will help fans manage tickets, get to and from the game, and access Kraken information. Four marketplaces featuring Amazon’s Just Walk Out technology with Amazon One will make the in-arena shopping experience more efficient and cut wait times so guests can get back to the action faster.

To watch the Coldplay concert, fans worldwide can tune in live on the Amazon Music app, the Amazon Music channel on Twitch, or on Prime Video for all customers with or without a Prime Membership. The show begins at 7 p.m. PDT on Friday, October 22. ESPN+ will show the Seattle Kraken game on Saturday, October 23. Puck drop is at 7pm.

Arena By The Numbers:

Climate Pledge Arena, located at Seattle Center, is the complete redevelopment of a historic landmark, originally built for the 1962 Seattle World’s Fair. It will be an industry first, including being expected to be the first net-zero carbon certified arena in the world. Home to the NHL’s Seattle Kraken, WNBA’s Seattle Storm, and the world’s biggest performers of live music and events, Climate Pledge Arena will open in October 2021.

Climate Pledge Arena will serve as a long-lasting and regular reminder of the urgent need for climate action. The Climate Pledge, which was founded by Amazon and Global Optimism in 2019, is a commitment from companies globally to be net-zero carbon by 2040. Visit climatepledgearena.com

About The Climate Pledge

In 2019, Amazon and Global Optimism co-founded The Climate Pledge, a commitment to reach the Paris Agreement 10 years early and be net-zero carbon by 2040. Now, 201 organizations have signed The Climate Pledge, sending an important signal that there will be rapid growth in demand for products and services that help reduce carbon emissions. For more information, visit www.theclimatepledge.com.