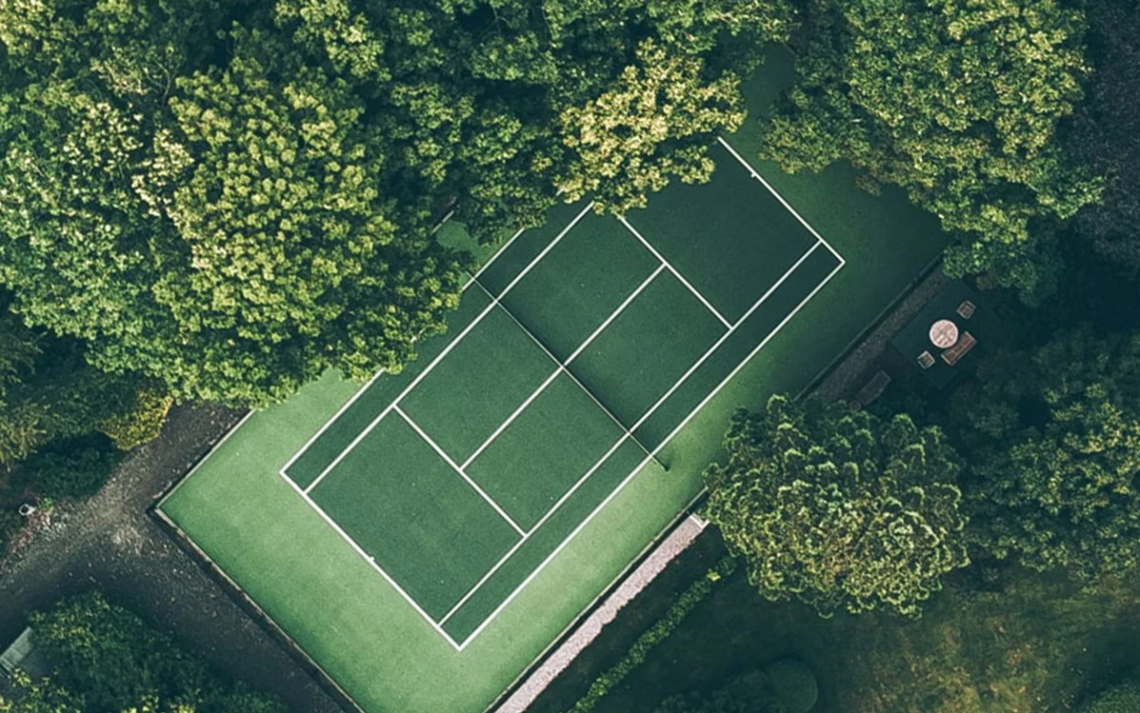 The FFT has put sustainable development at the heart of its strategy as a federation and demonstrates this commitment at every event it organises. For over ten years, Roland-Garros has included environmental, inclusive and charitable actions in the tournament’s organisation, and has got all of the tournament’s protagonists (spectators, partners, players, etc.) involved.

Having embarked on a low-carbon trajectory, Roland-Garros is working on reducing its carbon footprint by way of four key approaches and is also contributing to projects that promote biodiversity in France thanks to the support of all of its stakeholders.

4 ways the tournament’s carbon footprint is being reduced:
1) Promoting sustainable and soft mobility

A survey carried out in 2018 showed that 72.2% of spectators travelled to the stadium on transport that emitted low levels of greenhouse gases or none at all (public transport, on foot, by bike, etc.). However, 21.1% came in their car (vehicle’s average occupancy: 2.85 people) and 6.7% in transport such as a taxi or ride-sharing vehicle.

In order to support more sustainable mobility, Roland-Garros has set up several initiatives:

Bicycle parking is provided near the stadium entrances. At the Molitor security checkpoint, the bicycle park is manned by security guards and offers repair services for anyone heading to the stadium.
The official Renault fleet is 62% electric.
Renault, the new Premium Partner of Roland-Garros, is promoting shared mobility during the tournament with its 100% electric car-pooling app, Zity by Mobilize.
The media shuttles are 100% electric.
For the second year running, the Roland-Garros mobile app is inviting cycling fans to try out two different cycle routes. The first, more touristic route takes cyclists around Paris to discover important sites that feature in the history of Roland-Garros (Mellerio, life of Roland-Garros, Avenue de la Grande Armée, first ever tennis school, etc.). The other itinerary shows spectators the way to Roland-Garros from Paris city centre. This initiative is part of the “Mai à Vélo” (May on a Bike) event, organised by the group of the same name and initiated by the French Ministry for Ecological Transition and the French Ministry of Transport in 2020.

2) Contributing to the development of renewable energies

Since April 2016 and for all of its sites (National Training Centre, Jean-Bouin, Roland-Garros), the FFT has been supplied with 100% renewable energy from ENGIE.

This year, in addition to the mobile charging stations – some of which are powered using “classic” solar power – the FFT and ENGIE are installing innovative organic and flexible solar panels.

To mark the recent renewal of the partnership with ENGIE, a study is being carried out to examine how the projects to boost the stadium’s self-sufficiency can be rolled out on a larger scale.

3) Promoting and offering sustainable food in the stadium

In partnership with Yann Arthus-Bertrand’s GoodPlanet Foundation, the FFT is working with all of the tournament’s restaurants and caterers on a sustainable nutrition plan, with the aim of offering products that are ever more responsible, something that is necessary in face of the climate crisis: certified, seasonal, locally-sourced, etc.

The food served to the general public includes a range of food products certified “Better for the climate”. The products with this label have a low carbon impact, according to the criteria rigorously defined with the GoodPlanet Foundation.

On 22nd May, Sustainable Development Day, the food served in the hospitality areas will be 100% sustainable.

Since 2014, the FFT has rolled out a project to fight food waste, organised by the Le Chaînon Manquant charity. Any untouched food will be redistributed to various organisations in Paris that help disadvantaged people. This operation could not exist without the active involvement of the tournament’s caterers, Potel et Chabot, Paris Society and Sodexo. During the 2021 tournament, the equivalent of more than 3,700 meals were redistributed.

Beyond this project, which has a strong social impact, Roland-Garros is continuing to carry out actions to promote a circular economy.

An efficient recycling system is in place during the tournament. Fifteen different waste streams are sent to recycling and processing plants. This year, a new action is being rolled out in partnership with Perrier. Six machines for collecting cans and plastic bottles will be set up inside the stadium by social firm Lemon Tri. They will encourage spectators to recycle their empty drinks containers by rewarding the user for choosing to recycle with some fun incentives. The cans and plastic bottles collected will be recycled in France.
Reusable cups: Ecocups, which are used instead of disposable cups and are handed out in exchange for a €1 deposit, are automatically offered to spectators, whether for coffee, cold drinks, wine or even champagne. Every year, they help save 8 tons of non-recyclable cups.
Similar to the Ecocup system, the FFT is trialling reusable take-away food containers in the media restaurant in 2022, with the aim of rolling out the system more widely in 2024.
This year, Roland-Garros has developed a collaboration with Perrier, the tournament’s hydration partner for over 40 years, to provide limited-edition reusable water bottles. Various drinking water fountains will be available to players, organisation staff and the media inside the stadium and throughout the duration of the tournament.
Bio-waste: A system to manage bio-waste (food and organic waste) has now been rolled out in all of the organiser, media and player restaurants, as well as the new Village.
Plastic bags: The FFT and its partners made the decision to ban plastic bags inside the stadium. Now paper bags are given out in the shops and food stores, and only when truly necessary. Furthermore, plastic “polybags” are no longer used to wrap the tennis racquets in the stringing rooms.
A system to collect waste water has been set up in the area set aside for players to practice during the tournament (Jean-Bouin). It recycles and filters the used shower water and uses it to flush the toilets. This system, which is inspired by the one used in the Concordia station in the Antarctic, allowed 31,000 litres of drinking water to be saved in 2021.

Initiated at the 2020 tournament, the #Tennis4Climate movement is being extended in 2022 thanks to contributions from the tournament sponsors, which will be used to co-finance a reforestation project in the Contadour massif, in Provence, which is planned for autumn 2022. This follows on from the first two successful reforestation projects that were financed thanks to Roland-Garros, in the state-owned Belvédère forest (2020) and in the Toulourenc forest on Mont Ventoux (2021).

This year, the public can contribute by adding a €0.50 donation when paying for their purchases in the catering areas and La Griffe store.

“The FFT is very proud to be involved in the Provence-Alpes-Côte d’Azur region’s Climate Plan and to be part of this superb initiative. This reforestation project is a concrete illustration of the FFT’s commitment to helping the environment, particularly through the events that the federation organises,” announced Gilles Moretton, President of the French Tennis Federation.

2) Preserving biodiversity inside the stadium

The project to modernise Roland-Garros stadium included a desire to improve local biodiversity and the site’s ecological role with an ecological management plan designed by a professor from the French Natural History Museum. This plan was rolled out over the five years of building work.

As an example, the local fauna has been preserved: natural borders have been created to connect the Bois de Boulogne up with the city’s parks. The installation of insect hotels will encourage a variety of insects – some new, some already on site – to make the stadium their home. These insect hotels, which are specifically adapted to the species already present on the site, join the 21 beehives tended year-round on the FFT’s sites, including the roof of the Club des Loges and the Village. This initiative helps maintain the local bee population as well as boosting the reproduction of certain plants, thanks to the bees’ role in pollination.

With the aim of making Roland-Garros tournament more open, more inclusive and more accessible, this year the FFT is prolonging its philanthropic ticketing operation to make tickets more affordable for young visitors (tickets priced at €10 for under 25s), which proved a huge success in 2021 with more than 8,800 tickets sold.
New for 2022: 2,400 tickets for the Qualifying Rounds will be gifted to various charities connected with the FFT and its partners, to give people from all walks of life the opportunity to experience the magic of the tournament.

As an example, Philippe-Chatrier court now has more than 50 seats for people with reduced mobility. Various services are provided in the stadium over the tournament fortnight:

Around twenty specialist reception staff are on duty to help disabled spectators and their chaperones to find their way around, whatever their disability.
Wheelchairs can be borrowed by people who have trouble walking towards or around the stadium.
Disabled seating is available on all courts.
New lifts have been fitted.
A free shuttle service for disabled visitors has been put in place by Renault to transport spectators to the stadium from the various public transport stations.
Awareness is raised among the partners present on site.
In order to respond to the standards set out in the accessibility policy and to improve the reception of spectators with specific requirements, every year the FFT organises a day of discussion with experts and members of associations that work with people with disabilities.

In addition to the tournament’s iconic charity actions, like Stars Set and Match sponsored by “Hair Rituel by Sisley” and Aces du Cœur sponsored by BNP Paribas, a number of new initiatives are being rolled out for this year’s tournament. Since 2020, a charity donation box set up in the players’ locker rooms on Philippe-Chatrier court has allowed the players and ballkids to donate any unwanted sports equipment, which is then collected by the Emmaüs Solidarité charity and redistributed to people in need. More than 1,000 items of sports equipment were collected in 2021.

The traditional “Roland-Garros Kids’ Day”, which was created in 1977, will take place on 21st May this year. Like in previous years, proceeds from this charity day are used year-round to finance actions to boost solidarity in FFT-affiliated clubs (to help children from disadvantaged neighbourhoods, adaptive tennis, tennis for health and disabled tennis) thanks to the “Trophées des Actions Solidaires” awards, for example. This year, it will also help finance the clubs’ environmental initiatives.

Since 2020, Roland-Garros has sold a series of lovely tournament photographs. Thanks to the success of its debut edition, this charity sale was repeated in 2021 and now in 2022. The photographs are on sale in the online store and the La Griffe boutique. All proceeds from their sale will go to associations that support tennis in France and abroad through social, philanthropic, educational, cultural and environmental projects via the FFT Terre d’Impact endowment fund (the FFT endowment fund is an independent structure dedicated to philanthropy and patronage). This year, the endowment fund will also benefit from the sale of pots of honey from the beehives set up on the various Roland-Garros sites.

Continuing to raise awareness
Throughout the fortnight, Roland-Garros is rolling out a campaign to raise public awareness via videos – some of which feature the players – shown inside the stadium, on the courts and on social media.

After a two-year absence, the Green Teams sponsored by ENGIE will once again be present inside the stadium grounds to raise the spectators’ awareness about eco-friendly habits and sustainable development, by presenting the various actions rolled out.

Dates for your diary
From 16 to 20/05: Philanthropic Qualifying tournament.

05/06: Men’s singles final and World Environment Day, which will be celebrated at the tournament.