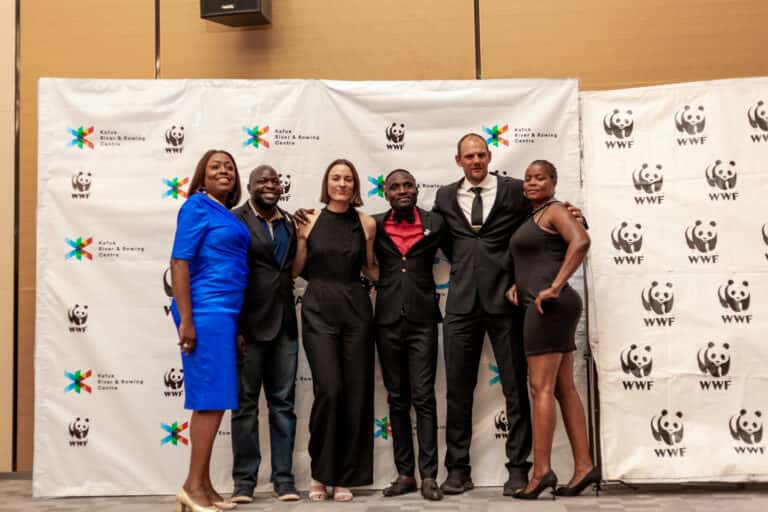 For the very first time, two of World Rowing’s ambassadors for the Kafue River & Rowing Centre (KRRC) project travelled to Zambia to support this initiative, launched jointly in 2015 by World Rowing and the World Wide Fund for Nature (WWF).

Olaf Tufte, a seven-time Olympian and two-time Olympic champion from Norway, and Maike Diekmann, who last year in Tokyo, was the first-ever rower to represent Namibia at the Olympic Games, attended a fundraising dinner which was held Saturday, 13 August at the Mulungushi Conference Centre in Lusaka, Zambia.

The dinner, hosted by WWF Zambia, was attended by over 150 guests who included the WWF Country Manager, representatives of Zambia’s Ministries of Sport and Green Environment, the President and Secretary General of Zambia’s National Olympic Committee, the President of the Zambian Rowing Federation and various stakeholders around the Kafue River and its freshwater ecosystem. Fundraising for the evening took the form of pledges made by the guests in their individual capacities and/or on behalf of their organisations.

In addressing the audience, Olaf and Maike both explained why clean, fresh water is critical to them in their own home environments as well as for all rowers, worldwide. They also emphasised the core values of the sport of rowing, how it positively impacted their lives, and their expectation that this Centre will be a place where young people can both appreciate the importance of sustainable water-management and learn to row.

The following day, Olaf and Maike, together with WWF and many of the KRRC fundraising team drove to Kafue to visit the site, already purchased by WWF Zambia and where the Kafue River & Rowing Centre will soon be constructed.

“This project, a pilot on the African continent, is important for World Rowing and all its member federations; it presents the perfect opportunity to raise awareness with our global audiences, and to support WWF in their efforts to tackle the water issues locally and globally. World Rowing is extremely proud of this continuing collaboration with the WWF and the Kafue River & Rowing Centre.” said Vincent Gaillard, Executive Director of World Rowing.

“The health of the Kafue river is critically important to people, businesses and nature in Zambia – and the River and Rowing Centre will play a key role in helping to protect and restore it as well as boosting rowing in the country,” said Stuart Orr, WWF Global Freshwater Lead. “The centre will showcase how partnerships between the sporting and environmental worlds – like WWF’s with World Rowing – can help to tackle the climate and nature crisis and drive sustainable development.”

About the Kafue River and Rowing Centre
In 2011, World Rowing and WWF, the World Wide Fund for Nature, began an alliance to use rowing to educate and raise awareness about freshwater. In 2015, the Kafue River & Rower Centre project was launched to act on the global freshwater issues that threaten our planet.

WWF and World Rowing are collaborating to build a world-class River and Rowing Centre on the banks of the Kafue River in Zambia. The KRRC will establish a regional hub where communities, scientists, conservationists, and decision-makers will come together to better understand, manage, sustainably use, and enjoy the freshwater resources they depend on. The Centre will also become a permanent base for the development of rowing and sport in Zambia, with outreach to other southern African countries.