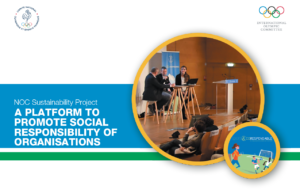 Over the last 20 years, France has been the host to 55 international competitions, climbing to the podium of the top three countries for hosting major world sporting events. Building on the national expertise, the French Ministry of Sports, World Wide Fund for Nature (WWF) France, and close to 80 organisers of sporting events signed a charter of 15 eco-responsible commitments to achieve the Paris 2024 Olympic and Paralympic Games legacy goals.
As part of their commitment to create tools to help stakeholders carry out the transition into sustainability in sports, the French O National Olympic and Sports committee (CNOSF), with support of the IOC, has launched a dedicated platform to share best practices on sustainable development. The platform for “environmental excellence through sport” or RSO (Social Responsibility of Sports Organisations) is a call for all stakeholders in the sports movement to structure and promote their approach to sustainability. 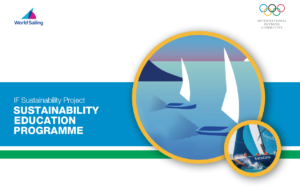 On the 2020 World Ocean Day, World Sailing presented a wide-reaching sustainability education programme in line with the federation’s Sustainability Agenda 2030 goal to broaden the knowledge of all sailors on sustainability issues which relate to their sport. This includes recognising the elements that can affect the sport and those which, in some cases, the sport can positively contribute to.
The Sustainable Education Programme was developed by the federation together with The Ocean Race and in partnership with the World Sailing Trust and 11th Hour Racing,
capitalising on the success of their own programme in the 2017-2018 edition of the race.
This new programme is tailored to age groups 6-8yrs, 8-10yrs and 10-12yrs to be delivered at a grass roots level in order to create awareness among the younger sailor groups and inform better choices. 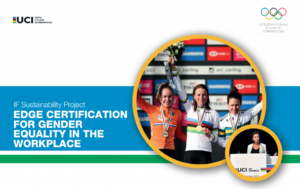 UCI EDGE certification for gender equality in the workplace

The world governing body for cycling became the first sports federation to receive the EDGE Certification Seal for gender equality on 23 October 2019.
After conducting a detailed internal assessment and undergoing an independent third-party verification process where the organization stands in terms of gender balance across a variety of metrics, the UCI obtained Edge Assess, the first of three-tiered levels.
The UCI is currently working toward the second level of certification, EDGE Move.
The next steps of the process include defining and implementing internal policies concerning: 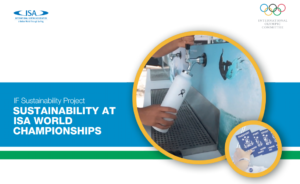 The International Surfing Association (ISA) formally acknowledged sustainability as a core value of the federation on World Environment Day 2018 as part of their pledge to the IOC and UN Clean Seas
campaign.

As an organisation with strong ties to the ocean, the ISA looks to inspire, educate and empower surfing communities around the world to become ambassadors of the ocean and sustainability.

Through the ISA World Championships, the federation found a unique opportunity to engage their athletes, National Federations, organising committees, and sponsors in their commitment to sustainability. Through education and empowerment, the federation has focused on three areas: 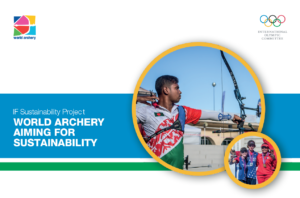 World Archery, a signatory of the UN Sports for Climate Action framework, has embarked on a mission to reassess their operations to find ways in which daily decisions and actions are contributing factors to a more sustainable sport.
At a federation level, every action can have a direct impact but also hold a highly symbolic power and deliver a strong message of awareness and motivation to all stakeholders.
World Archery’s impact assessment has identified, and therefore set their focus on, three key areas: 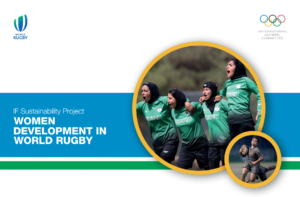 World Rugby launched its “Accelerating the Global Development of Women in Rugby 2017-2025" development strategy in order to position itself as a global leader in sport where women have equity on and off the field with representation and participation across all levels of rugby by 2025.
The strategy is built around five pillars: 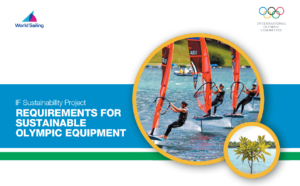 When it comes to the selection of Olympic equipment, International Federations (IFs) can mandate suppliers and have a positive influence across the sports goods and equipment industry. As part of the 2024 Olympic equipment selection, World Sailing decided to add sustainability as a criteria within the evaluation process as an opportunity to impact the wider marine industry.
While all of World Sailing Olympic equipment contracts require that companies operate in accordance with the IOC Supplier Code, the new requirements include the existence of a company sustainability policy, a life cycle assessment of the product, ISO 14001 certification and an environmental improvement programme.
The board-sports industry is a huge impactor to the environment through all the materials used, production processes and raw material extraction. Added to this is the amount of different types of plastics used to make the boards. There are on average seven different types of materials, making it almost impossible to recycle.
One of the windsurf board manufacturers,
Starboard, stood out with an existing strong sustainability offering within their products.
As part of their bid, the supplier demonstrated how they could reduce the environmental footprint from the production of the equipment. They did this by conducting a Life Cycle Assessment of their products, as well as a plastic and carbon footprint assessment at the company level and taking measures to reduce the footprint. 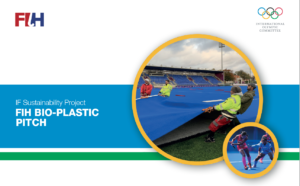 FIH welcomes the development and launch of the latest and one of the most sustainable hockey trufs ever used in international competitions. Pollgras Tokyo GT, a new pitch incorporating bioplastics, will be used during the Tokyo Olympic Games contributing to the vision of a carbon-neutral event. The surface also brings two third less water compared to previous surfaces.

Since the launch of its guidance document – Active Travel Guidance for Sports Stadia – in May 2019, Healthy Stadia has been working with a number of pioneering European clubs and stadia operators on the development of case studies offering further insight into the promotion of walking and cycling to sports stadia. The first of these case studies to be published is from colleagues at KAA Gent, profiling a comprehensive active travel strategy that has been led by their Football in the Community department. Based at the newly built Ghelamco Arena (20,000 capacity), the club has a serious commitment to active travel, and has developed a major mobility programme for supporters over the last three years, promoting: walking, cycling park and ride shuttle busses, regional bus routes for supporters, and, carpool parking spaces near to the stadium. Under the campaign title, ‘Cycling Buffalo’s’, KAA Gent have been able to install 2838 permanent cycle locking stalls, with another 600 mobile stalls, with an average of +15% of KAA Gent supporters coming to the Arena by bicycle – see below to download the full case study. Healthy Stadia will be publishing a second active travel case study that has been developed with Gdansk Letnica Stadium in the December edition of our newsletter, whilst we invite any stadium operators and/or clubs who are interested in showcasing their own work on active travel to contact us for further details on developing a case study.

In cooperation with its floorball material sponsor, UNIHOC, the IFF provides floorball equipment to countries where floorball is in its early stages, and also to existing IFF Member Associations based on a needs assessment. Equipment support comes in the form of sticks, balls, goalkeeper equipment and rinks.